The Story of Hilton

Nestling in the hills above Pietermaritzburg, at a distance of twelve kilometres, lies the picturesque village of Hilton. Enjoying a very pleasant all-year round climate, its park and English village like setting, boasts a wealth of botanical splendour. Regarded as the 'Gateway to the Midlands', it is here that travellers from the coast receive their first glimpse of the distant uKhahlamba-Drakensberg Mountains. Consisting of a number of leafy undulating suburbs, including Sweetwaters and Winterskloof, Hilton lies within close proximity to popular beauty spots such as Worlds View, Howick Falls and Karkloof. Now part of the uMngeni Municipality, Hilton has over 4 000 happy inhabitants who have chosen to occupy the peace and tranquility of the many gracious homes with which the area abounds.

Hilton owes its name to Jane Henderson, wife of farming pioneer and financier Joseph Henderson, who no doubt was nostalgically thinking of Hilton Park in her native Staffordshire when they first named their farm Hilton in 1860 which adjoined Philip Zietsman's Voortrekker farm, named 'Groenekloof' and was used as access to the early wagon routes.

The Zulu name for Hilton is Nyazake, which means 'His Feet' and is derived from old Zulu war trails connecting the uKhahlamba-Drakensberg region with Kranskop, approximately where Hilton farm is today. The earliest record of Europeans in the Hilton area goes back to the early 19th century when transport riders travelled into the hinterland over World's View, making overnight stops at Ketelfontein, Sedgley and The Knoll at Winterskloof.

Voortrekker farmers were the first to settle in the 1840's when they were granted land by the British Government, two early large farms Groenekloof and Ongegund.

The 'village' of Hilton began when prominent residents of Pietermaritzburg purchased property to build cottages as a retreat from the summer heat and dust of the town. A glimpse of this period is to be found in Reta Pope-Ellis' diaries, kindly loaned to us by her granddaughter, Elizabeth Clarke. Reta, her husband Allan and children lived at the Wattles in the present area known as Hilton Gardens from 1892 to 1903. They led a very social life, playing tennis, visiting the residents of Howick, Pietermaritzburg and Hilton Road as well as holding concerts and bazaars to collect funds for the building of the Public Hall and to buy an organ for the Anglican Church.

The main source of revenue in the area derived from timber, hides and skins. Sugar was introduced later once a frost free variety was developed. The Town Hill Wattle Company was an example of these primary activities and a number of early photographs show the loading of the wattle bark onto trucks at various railway sidings. The Natal Tanning Extract Company had many acres of valuable plantation in the area, the moist and sometimes misty climate contributing to successful tree growth. The Natal Paint Manufacturing Syndicate acquired land with a view to developing a base resource from the yellow ochre clay found in the Hilton area but this soon changed to real estate. A company called Hilton Road Estates bought up land in the early part of the century. Much of this was made up from Sub Lot 5 of the farm Groenekloof to which later portions of Ongegund and Richmond Hill farms were added.

Everyone depended on the railway, which was built in 1884 for commercial purposes and travelling to and from town. The only other means of transport being horses, ox and mule wagons, although some residents thought nothing of walking the twelve kilometres to town to visit each other. The wet and misty climate played an important part in their lives. When roads were impassable, they used to wire or send post cards from the station and letters were written daily to friends and relatives.

Voortrekker Road running behind Hilton Village Shopping Centre was in fact a transport route and came up to World's View from Pietermaritzburg, past Ketelfontein and Sedgley and branched off at Edgehill, just before Crossways. It carried on across part of the land currently occupied by the Quarry Centre past the present day Jacaranda Centre continuing to Groenekloof Road. It then met up with what is now the Cedara Road to Howick. In those days, properties were large and sprawling. What a delightful rustic place it must have been with only fifteen houses, few vehicles and only the sounds of the steam trains and the sawmill near the station.

the Hilton Road Garage and look towards the station, we would have seen a gravelled level crossing opposite to where the present Homenet Building is situated. The building used to belong to Reggie Egan and was later owned by the Brewer and Pole families.

The station would have been busy with trains loading poles and hides and skins, while further down the road where Hilton 'Build It' hardware store is today, was a saw mill. Jack Anderson owned a bottle store situated on the slope behind where the present Village Shopping Centre is situated and Walter Gibbons had a general dealer store where the Khubela Store is today. The small post office and telephone exchange were situated next door. Molly Schofield acted as postmistress while her twin sister Letty was the telephonist. In the early days, sporting facilities were limited and cricket practice was often held on the main road at the back of the railway station. However, a very rough sports field was established between St Anne's and Laddsworth Primary School.

Further along the main road, was the first Hilton Hotel, built in 1906 and owned by Mr. A J Harmsworth. Judging from the photographs we have, it was a very smart place for the time having a carriage to fetch guests from the station and Indian waiters wearing red sashes.

A bar and bottle store was built on the roadside opposite the old vicarage. Some temptation for the local vicar! If we were to turn into Church Lane, we would enter the side entrance of the old Hilton Road Hotel, then proceed past the Church of Ascension with the Mortimer and Freeman homes on the left next to St Anne's Diocesan College and continue down to the Pechey home. All of these houses are now incorporated into the St Anne's estate and the Pechey home is now Mollie Stone House.

Below St Anne's and approaching Vlei road was a large dam where picnics and fairs were held and it was also used as a watering hole for the numerous cattle in the area. This dam was filled by the spring on Manor Farm which became the source of the Gwen Stream running through the Hilton College estate to the Umgeni River.

Extract from The Story of Hilton by C & M Lake and J Hoepfl. 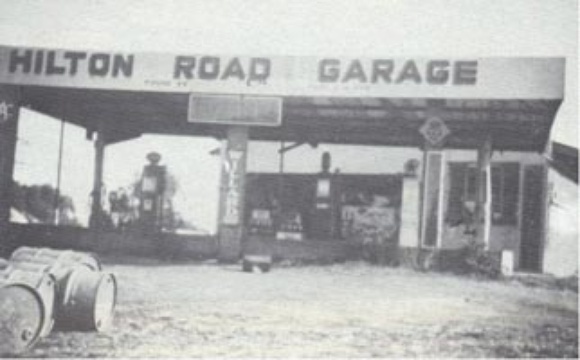 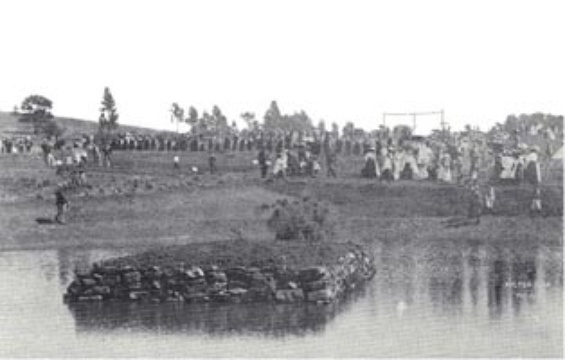